Windows: Multiple users, one user gets a blue flash while attempting to launch applications while the other user works fine

In the event log i saw something similar to this:

Well it turns out Winzip 19+ was installed on the server and seems to have been the root cause of the issue. I found the fix to be disabling Explorer File Association Helper in Winzip Options 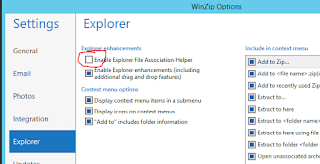 Popular posts from this blog

February 02, 2012
Here is an excel document I created that will ping a list of nodes in column A and give results in column B. There are much better tools that can be used such as angry ip scanner  http://www.angryip.org/w/Home . I just wrote this as an example Requirements: Tested with Office 2010 Download: Download
8 comments
Read more

September 20, 2017
Wrote this to get certificate expiration information for certificates that expired 5 days ago to ones that expire in 90 days. Wrap an invoke-command around this for remote query. $Before = (get-date).adddays(90).ToString("MM/dd/yyyy") $After = (get-date).AddDays(-5).ToString("MM/dd/yyyy") <# https://blogs.technet.microsoft.com/poshchap/2016/01/01/powershell-and-certutil-exe/ We create a date range with $Before, i.e. certificates expiring before this date, and $After, i.e. certificates expiring after this date. These values are converted into something that certutil can understand - $Restrict. This is then used with the certutil -restrict parameter. #> $Restrict = "NotAfter<=$Before,NotAfter>=$After" $Report = @() $cmd = & certutil.exe -view -restrict $Restrict -out "RequesterName,CommonName,Certificate Expiration Date","Certificate Template" $SplitLines = $cmd.Split("`n`r") $Index = 0 foreach ($line in $Sp
Post a Comment
Read more